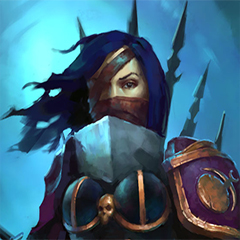 There are many names that terrify citizens of the Imperium and insipre hatered into the hearts of the Inquisition and loyal Adeptus Astartes. Least of them are female names, like dreadful Mirael Sabathiel, alluring Theronsaen or wicked Lishkar Delphues.

Being few in numbers those women that manage to rise in powers on their bloody way to domination are even more dangerous than their male counterparts. As they gain their ruling position not only through brutal force and violence but also through deceit, provocations and seduction.

Amongst these heretical names one is pronounced in whisper even by mighty Primaris Captains – this name is Anastessa Lucia.

Lord Severius of the Violators

Perverted leader of Violators Chapter splinter warband – Severius was known for his unstoppable crave for perfection. It is not uncommon for Slaanesh followers to pursue the perfection, but Severius searched it not for himself. He didn’t want to became better than he was in anything, as he considered himself already perfect. He maniacally demanded everyone and everything around him to be perfect.

With pleasure he destroyed those who fit not in his ideals. Be that his fellow battle-brothers, a crafted weapon or a captured slave. He became so obsessed with improving everything around him, that one day he called into the warp with all his will, looking for answers. A beautiful diety answered. It was Deimos, Herald of Slaanesh.

Pleasure god’s maiden saw the heretic’s burning soul clearly. She promised to Severius, that once he accomplish necessary conditions, including lots of sacrifices he’ll receive an ultimate reward from She Who Thirsts. That reward will be perfect.

Following his oath to Deimos, Severius rushed into the realspace tormenting one Imperial world after another.

Thousands of innocent souls were thrown screaming into the lips of Young God. Depraved deeds were commited as Severius and his warband were fulfilling the daemonettes’ prophecy.

During his crusade Severius lost any reason completly. Even his leutenants tried to persuade him into more careful planning of attacks. But with no result, except that two of Severius trusted brothers were slaughtered by his hand.

The “Perfection Crusade” costed a lot to Severius’ warband. Throughout decades he lost about half of his men: around hundred Heretic Astartes warriors, thousands of cultists and even two precious Helbrutes. And so tensions withing his warband started to grow.

Remaining leutenants were eager to cast Severius off, but his mighty Champion Darius remained loyal to Chaos Lord, and none of Astartes could match both Darius and Severius in combat. So Severius crazy ruling continued.

Severius was first to regain his voice, asking the female who she was. Her voice sounded like a warm wind: “I’m your perfection, mighty Severius”. 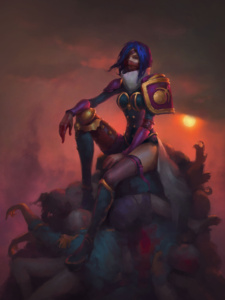 The lady’s name was Anastessa. She explained to Severius that she was the perfection, that Deimos had promised to Severius.

Indeed, there were no explanations needed neither for Severius nor for his power armour clad battle brothers. Even completly blind person could feel that Anastessa was the most beatutiful creature in galaxy. She was young, tall, slender. With perfect body, face and hair. Every person that looked at her, saw exactly that kind of beauty that he secretly wished to witness.

Severius proclaimed Anastessa as his wife and mistress and started to plan a new crusade. This time he promised to throw anything that his lover would wish at her perfect feet.

That what Chaos Lord did not know was Anastessa’s true intentions.

She didn’t remember anything from her past life. She even could not remember how and why did she find herself at that orbital station prior to Severius’ raid. But she knew, that her fate lied in power. Something was constantly talking to her in her dreams, showing events of the future, filled with power, fearful glory and dark pleasures.

Unknown even to Severius, his patron-diety Deimos promised to Anastessa the power beyond mortal understanding. For Deimos, arrogant Severius was just a tool, which would help her real protege – Anastessa to claim anything she wanted.

Naive was Severius thinking that Anastessa was his prize for his efforts, actually he and his warband were a gift from the Dark Prince to her. As Anastessa’s hunger for power grew, fed with Deimos’ temptations and promises, she started to plot against her husband.

Slowly and secretly she seduced each of Severius’ leutenants, fulfilling their sinful desires and fetishes for her. It was not difficult as Anastessa had mystical power over human sexual wishes. Appearing to each being as it’s most desirable object, she was able to influence it’s lust by anchoring certain sexual fetishes of the victim to herself. One by one Severius most trusted Astartes became slaves of her will, who just wished to worship her perfect body yet another second more.

The Perfection that Severius craved so much soon would become his doom.

Ideally playing her role as faithful concubine to Severius while secretly having all his warriors on a leash, Anastessa was almost ready to take power in the warband.

Just a single person stood between her and the goal. It was Darius – Severius best friend and Exalted Champion of the warband.

Deimos, the Herald of Slaanesh warned Anastessa, that Darius’s fate is concealed from her. The daemonette could not see if Darius will fall prey to Anastessa’s charms following his battle brothers. Maybe the Dark Prince had his own plans for this promsing warrior. Who knows? So Deimos whispered into Anastessa’s ear to get rid of Darius in some other ways.

And so one day (or night – there is no difference inside the Eye), Severius and other Violators rushed into Darius’ chambers. Enraged beyond any limits, the Chaos Lord accused his Champion of treachery.

Darius, the most loyal, of all could not understand his master and now former friend. It was then, when Anastessa stepped  out from behind Severius and shaking with tears pointed her pretty finger at Darius, when the Champion started to understand what happened.

Severius’ wife then gave remarkable performance, crying and cursing unlucky Darius and accusing him of forcing her into intimacy. She also told everyone that while raping her Darius promised to kill Severius, to became her master and Lord of the warband.

Being one of the best swordsmen within Eye of Terror, taken by surprise Darius could not defend against Severius and dozen of his Violators at the same time. The fight was quick and that what remained of Darius was sealed in Helbrute sarcophagus.

With Darius crying and moaning inside the Helbrute, Severius’ fate was sealed.

The Violators came to their Lord’s throne chamber while Severius and Anastessa “played” with each other. Unfortunately for Severius, this night one of the game conditions was him being chained so firm, that he could not even move, despite his unhuman physical strength.

Anastessa rose from his body and carefully explained to Severius all the events that led to the present point of time. She shivered with delight as she slowly revealed her successful plan of taking his power, seeing how Severius face changed from incomprehensible to enraged and at last – hopeless.

Having finished the story she ordered Violators to kneel and accept her as their new Mistress. So they did and the sound of dozens of ceramite knee-pads proclaimed beginning of Anastessa’s rule.

I give my eyes to admire Her

I give my tongue to please Her

I give my knees to kneel before Her

I give my hands to kill enemies of Her

Severius was not murdered, as it was not the way Anastessa dealt with her victims. Instead, the former Lord had to survive lots of suffering and humiliation. First he was thrown helpless to the slave pits, where the most disgusting cultists dwelled. Sitting on her throne and taking the finest wine, Anastessa watched with joy as awful half-humans scratched and ate Severius' eyes away. 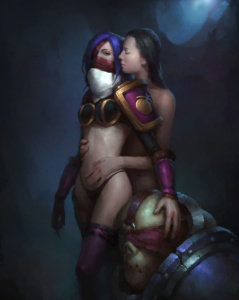 Finally Severius' will shattered, as even the strongest has their limits. What was left of the mighty Chaos Lord was a blind creature, with no ability to speak and no other purpose in life than to please those who would order it.

Severius then was released. He crawls on his four around the upper decks of warbands' ship, waiting for somebody who needs his service. The Violators gave him new name, calling him "The Pet". Very seldom, when Anastessa needs to get something from Severius, rather than The Pet, she uses special brain manipulations, to retrieve Severius' former personality for a short period of time. Usually it is when the warband goes to war, and Severius is sent to the battle along with Chaos Spawns, controlled and guided by one of the slave-girls to fight at the frontline.

But more often she returns Severius into his uncontrolled body to mock him. During these cases, she kindly reminds him about what he had lost. These conversations usually are followed by intimacy with one of Severius' former friends in front of him. Such acts send his tormented soul back to oblivion.

Bitch, your host consists of slaves, my of Berzerkers!

After Anastessa took full power over Severius' warband, she started to strenghten her army at once.

During Severius' rule the warband came to the brink of extinction, as former Chaos Lord paid little attention to his leutenants' advises and never counted his warrior's casualties. There were about eighty Violators left when Anastessa became Chaos Mistress, so her first move was to attract more powerful warriors to her needs.

Under Deimos guidance, Anastessa managed to find a daemon world of Katharsis, where Slaanesh cults were fighting their Nurgle rivals. After planetfall, she ordered her cultists to attack defending Nurgle forces wave after wave singing chants to Slaanesh as loud as they could.

As hundreds Anastessa's cultists died singing in this self-destructing attacks, a battle-company of the Kakophoni was attracted by the noise of the battle.

Captain Vierael of the Kakophoni Choir demanded an audience with warband's master to challenge him, as his Noise Marines joined the battle. Vierael was ancient and proud warrior, who used to challenge any leader he met. After each challenge Vierael's battle-company grew, as recruits from rival's armies joined Vierael's host, due to his former leader's death.

To his surprise none of Violators tried to interfere. Proud and arrogant Emperor's Child started to walk towards Anastessa's battle-tent. He passed through Violator's honour guard, none of them moved. As he approached the tent, with each step his mind became filled with strange and weird desires, that he considered to be too human for him before. As he reached the entrance, one of the guarding Violators welcomed him to slavery with laugh.

Vierael was eager to slay the mocker at sight, but could not control his body anymore. He became lustful trembling creature whose only desire was to fulfill the most primitive instinct apart from breathing and eating.

Emperor's Child entered the tent. What happened there between Vierael and Anastessa was unknown. After several minutes of silence, distrubed only by distant cultists chanting and Noise Marines sonic blasters, Vierael crawled out of the tent. 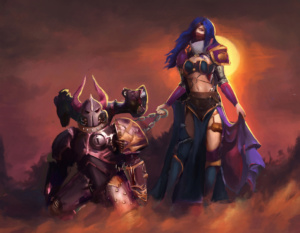 To other Emperor's Children surprise he was led on a leash by a breathtaking beautiful maiden. She allowed Vierael to speak, and shaking, he told his Kakophoni that from now on the battle-company becomes faithful warriors of Anastessa and her host.

Then Anastessa let Vierael to lead her Violators and his Noise Marines to destroy defending Nurgle's cultists.

After battle of Katharsis, Anastessa's warband became much stronger thanks to Vierael's battle-company and so the name of "the Slavehost" was spoken out loud for the first time.